The role played by Realme X50 is not only a pioneer, but also an important part of the strategic layout of realme, and from the release rhythm, it also has the meaning of seizing the opportunity of thousands of yuan market. In less than a year since realme returned to China, it has successively launched products in various price ranges, thousands of yuan or even more high-end flagship products carrying Snapdragon855 Plus, realme has completed its layout, and the first press conference at the beginning of the year in 2020 aimed at the increasingly hot 5G market and dropped a blockbuster bomb to the market at a very competitive price. At the same time, realme and Redmi also formed a competitive situation. 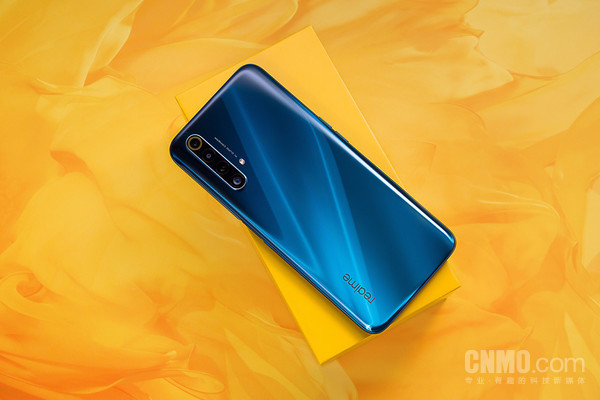 Realme X50 this time from the packaging before the white and blue design style, the introduction of dazzling yellow, more eye-catching, but also more highlight the youthful temperament, of course, as for this packaging design change is permanent or exclusive design for 5G, it is not known, but it still makes our eyes bright. . 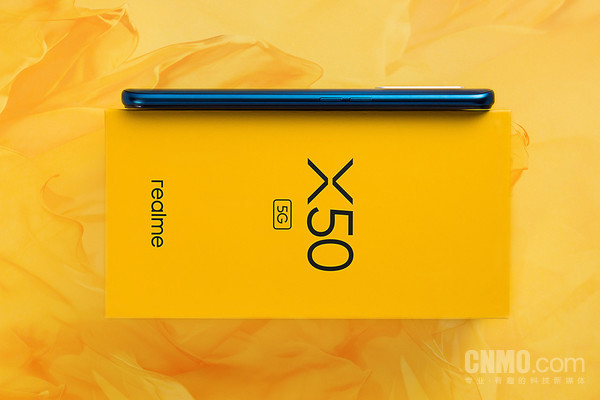 Back to the product itself, the back of Realme X50 is somewhat similar to the realme XT that has not been released in China before, but the specific design process is distinguished. The Corning gorilla 5 generation glass with 3D hot bending technology is used in the Realme X50 rear cover, which not only makes it more sturdy and durable, but also provides an elegant Radian to fit the palm, a better feel and a new color match, which can be said to be impressive. 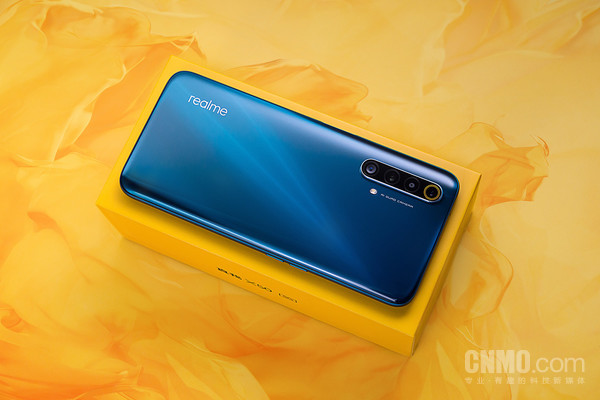 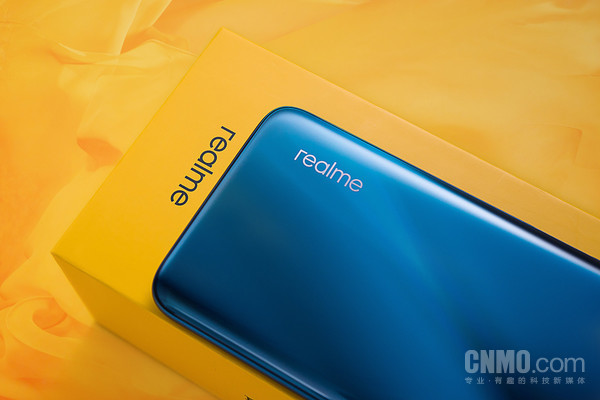 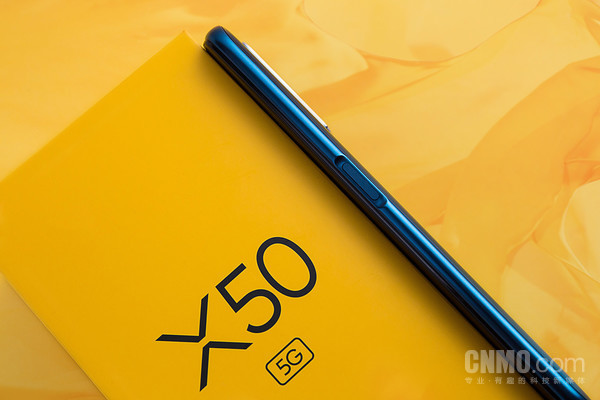 On the positive side, Realme X50 has made major design changes, such as the first introduction of realme digging screen, but also directly on the double digging screen, which may also become a trend in 2020. In terms of parameters, the screen of Realme X50 is 6.57in. Although it is double-dug, the screen ratio still reaches 90.48%. At the same time, the surface of Realme X50 is also covered with Corning gorilla fifth-generation glass, making it more sturdy and durable. In addition, Realme X50 canceled the 3.5mm headphone port this time. 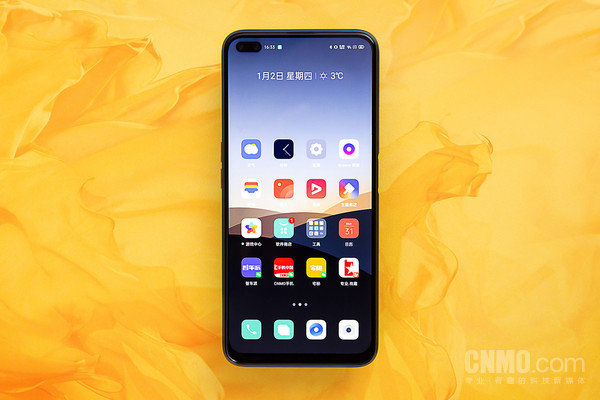 Realme X50 has added a 120Hz refresh rate screen to the realme X2 Pro 90Hz refresh rate screen, which officials call the free screen. It displays 120 pictures per second, which is twice as much as the traditional 60Hz display. The most direct feeling that the 120Hz high refresh rate screen can bring is a smoother, more realistic and immersive experience, such as a more realistic and fluent viewing effect when watching high frame rate movies, and a more smooth and realistic display screen and more accurate operation response when playing high frame rate games. Realme X50 can also intelligently switch frame rates according to the needs of different applications, thus further extending the battery life of the phone.

Take a closer look at Snapdragon765G

Qualcomm Snapdragon765G, as a processor integrated with 5G baseband released by Qualcomm not long ago, has a better 5G performance, supports dual-mode all-Netcom 5G, and theoretically has a peak download rate of 3.7Gbps and an upload rate of 1.6Gbps. Realme X50 has achieved full coverage of the domestic mainstream 5G network band, including N1, N41, N78 and N79, which is compatible with the 5G network of the three major domestic operators and meets the network entry standard of 5G mobile phones. 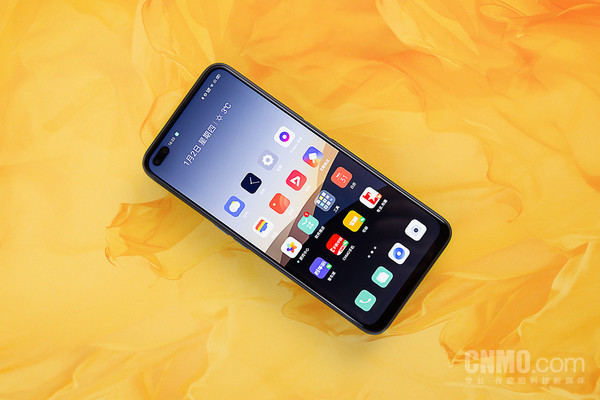 After introducing the parameters, we did a simple 5G speed measurement with Realme X50. The speed measurement software is Speedtest, and the operator card is China Mobile. We tested it indoors near the East Bridge in Beijing. From the test results, the downlink speed of Realme X50 reaches 433 Mbps, the PING value is 10 milliseconds, and the jitter rate is 3 milliseconds. From the test results, the performance is quite excellent. If the outdoor 5G coverage is better, there will be a better performance. I believe you can feel the 5G speed with Realme X50. 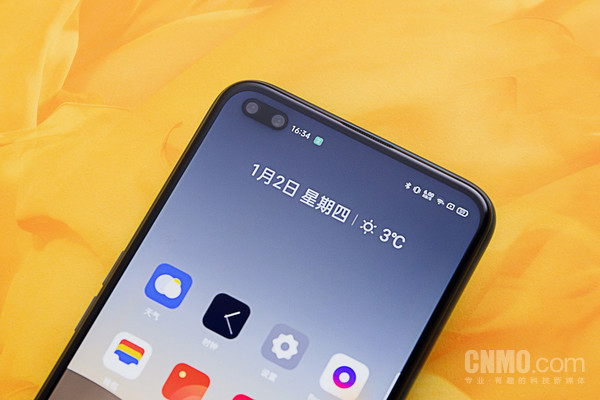 After testing the 5G rate, we return to the initial performance test. After all, there are not many tests about Snapdragon765G. We will use AnTuTu and Master Lu to test them. Let’s take a look at the test results. 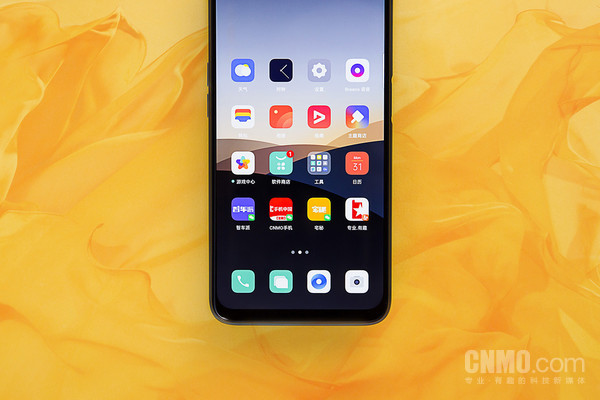 One of the big surprises of Realme X50 in taking pictures this time is that the front is designed with a wide-angle dual-lens camera. On the basis of a 16 million-pixel main shot, a 8 million-pixel ultra-wide-angle lens is added to support 105 °ultra-wide-angle shooting, which can accommodate more people to take pictures and larger scenes. It is worth mentioning that when taking a selfie with one hand, the user can completely switch between normal mode and wide-angle mode with one hand, which can be said to be very convenient. 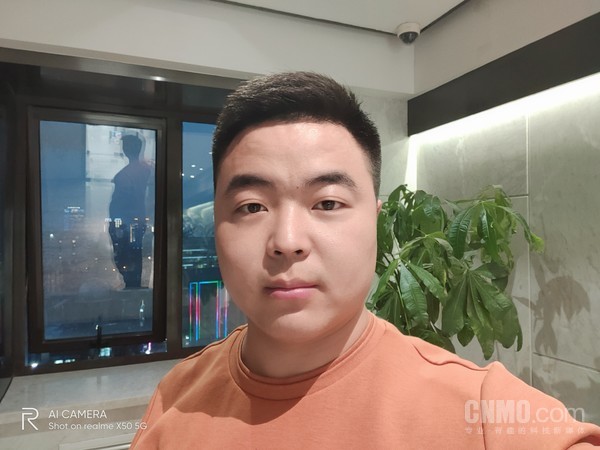 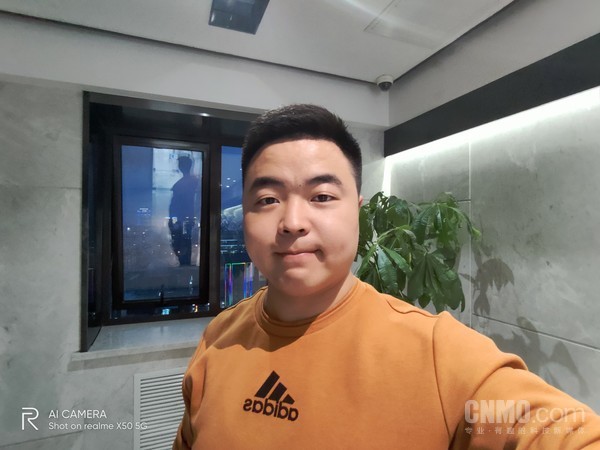 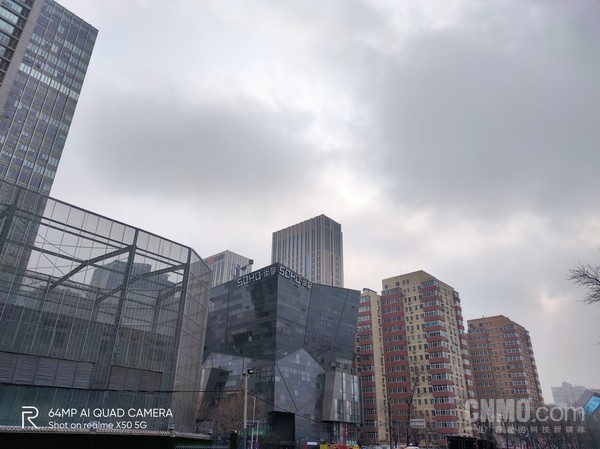 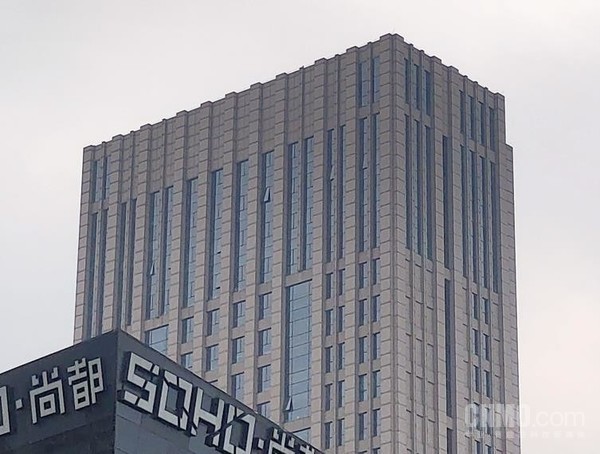 Zoom in on the details.

First of all, let’s take a look at a set of 64 million-pixel samples. if you zoom in, the details of the distant building are still clearly visible, showing a strong analytical ability. In fact, there are good application scenes in our daily photos, where the photos are full of details. The disadvantage is that the 64 million original film will take up a lot of space, so it is not recommended to use this mode as a daily photo mode, the ordinary photo mode is enough. 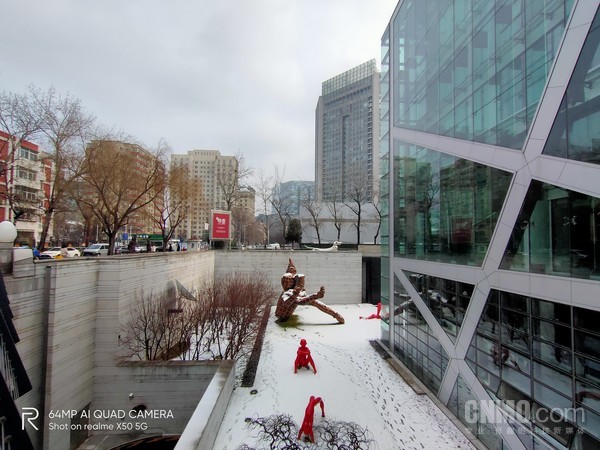 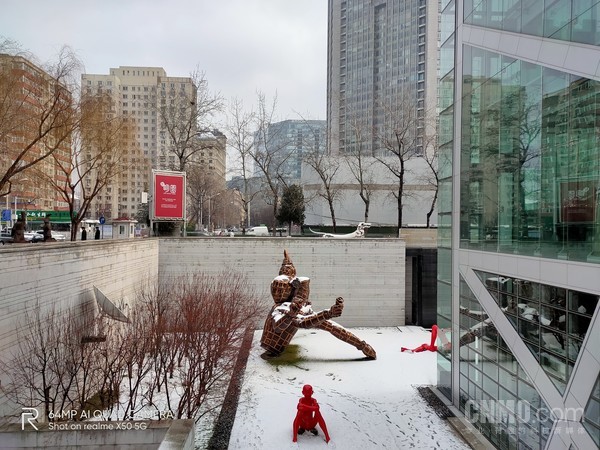 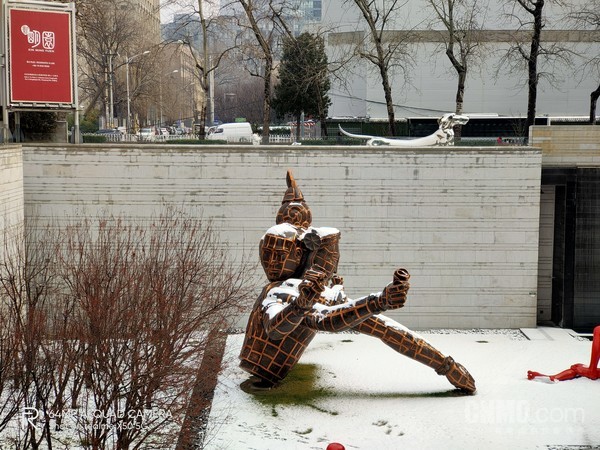 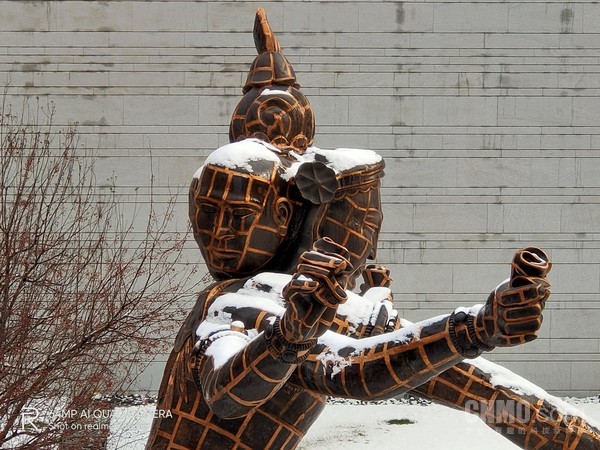 Let’s take a look at a group of zoom samples, which are shot in Realme X50 ultra-wide-angle mode, normal mode, 2x zoom and 5x zoom respectively. From the actual effect, even in the case of 5x zoom, the photographed object is still clear. Realme X50 has enough strength to provide users with different focus photography experience. 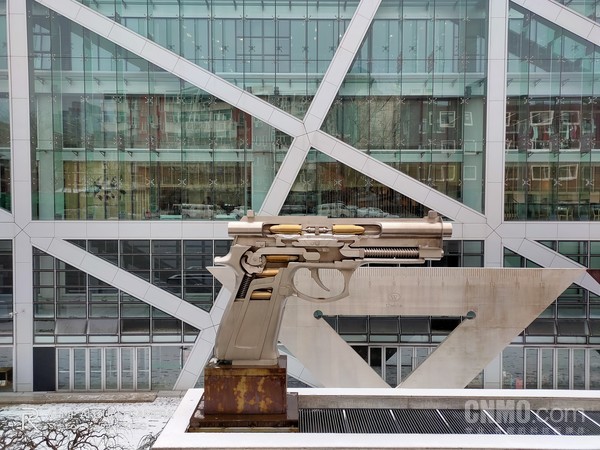 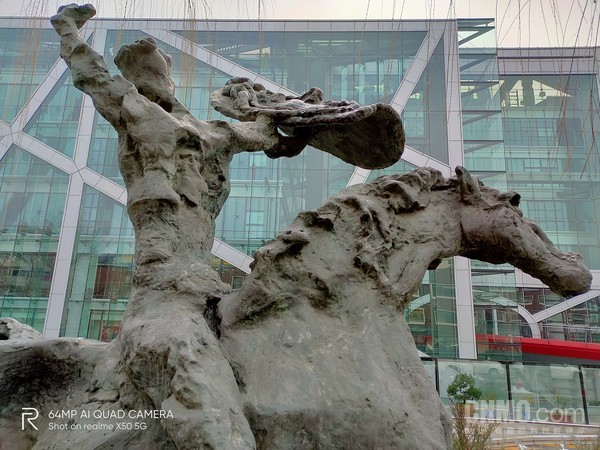 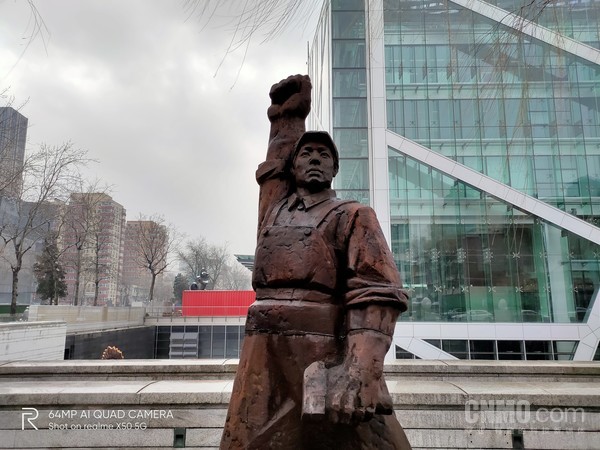 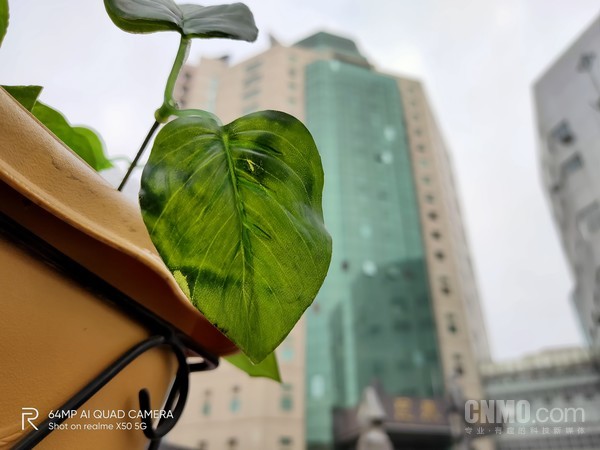 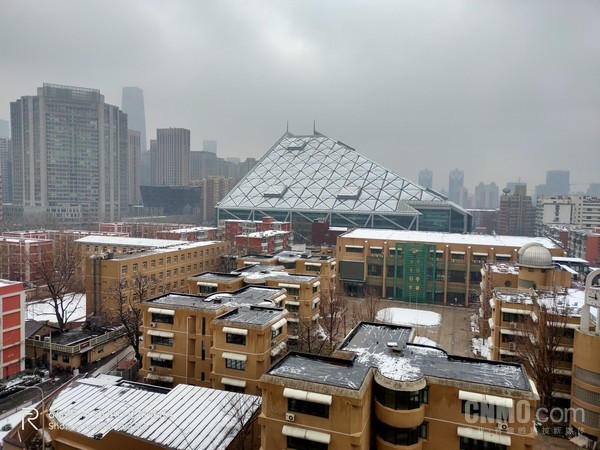 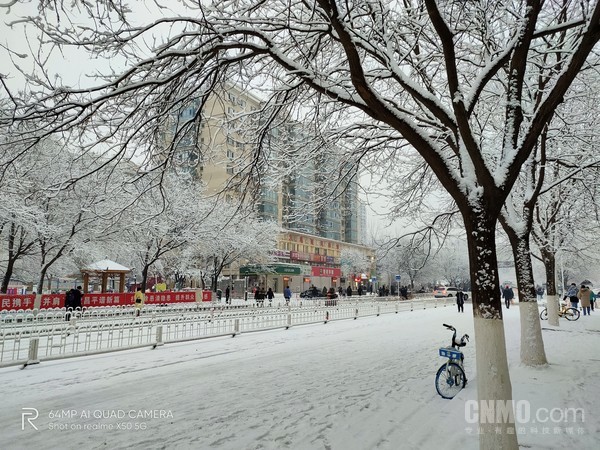 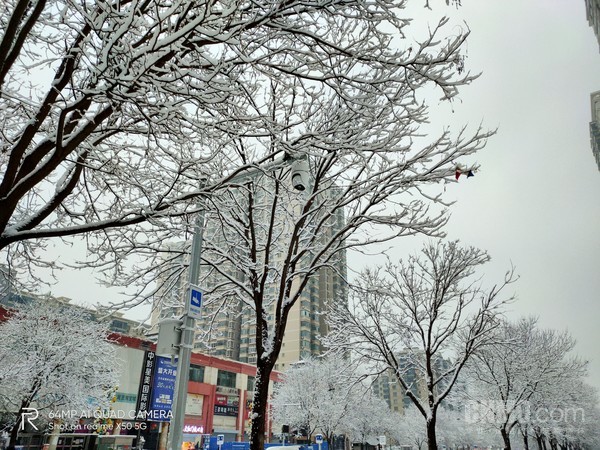 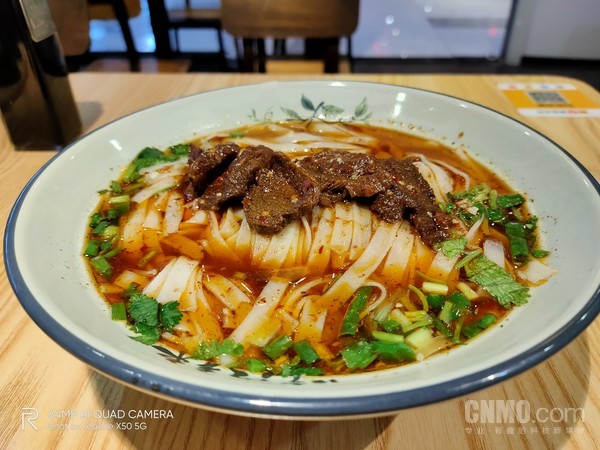 From the above set of samples, it is not difficult to see that Realme X50 can be noted in terms of color performance, although it is only a product with a price range of 1000 yuan, but its performance level is much more than this. When filming delicacies such as Hunan rice noodles, the actual shooting effect can be said to make people swallow straight saliva, can not help but want to eat first as a tribute. At the same time, it also performs well in the ability of virtual background, and the transition between the subject and the background is natural, which further highlights the subject of taking pictures. 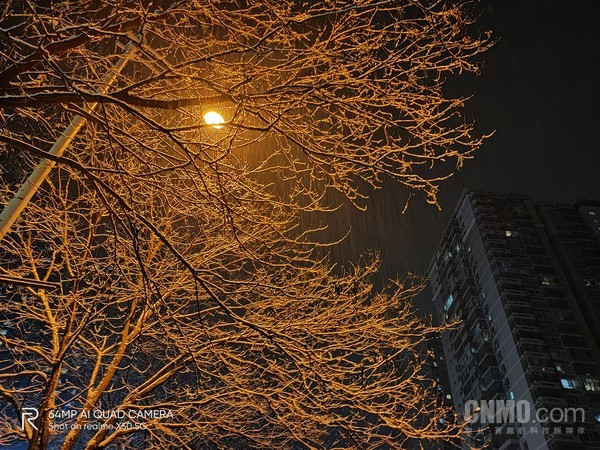 The last one is a sample of Realme X50’s super night scene, just in time for the first snow in 2020, so it’s only natural to record it. In the Realme X50 lens, street lamps, snow, trees can be said to form a picture with its own filter, goose feather snow in the process of falling, after a long exposure of the super night scene to show its falling curve, the snow seems to fall more heavily.

Previously, several products of realme have been directly using ColorOS,Realme X50 as the first model of realme New year, while realme UI, which is deeply customized and optimized based on ColorOS 7, provides users with visual design and unique features specific to realme. At this time, the last flagship work, realme X2 Pro, is about to throw an envious eye, although it can also be on ColorOS 7, but it is still too late.

Based on the guidance of the original design concept, realme UI presents a sense of design from various interaction details (system design button, notification bar icon, etc.), thus giving users a visual experience with a sense of quality. Overall presents a high saturation, high brightness color matching, hoping to bring a sense of youthful vitality. In icon design, all icon design elements are based on a set of circles in accordance with the golden ratio, and any Radian in the icon is taken from this group of circles. At the same time, combined with the quasi-materialized design style, it brings simplicity and harmony. At the same time, it has a highly recognizable icon design.

The new realme UI insists on “brisk and economical” dynamic scheduling of system resources, optimizes key scenarios, ensures smooth operation, increases application startup speed by 25%, and improves global fluency by 20%. With the use of AI power-saving technology, the battery life of mobile phones in daily use has been comprehensively increased by 10%, and the power consumption of standby power at night has been reduced by 35%. 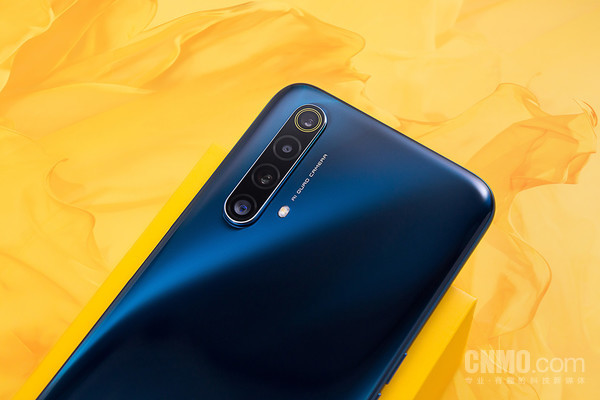 Write at the end

As the beginning of the year in 2020, it is no exaggeration to say that Realme X50 has made a good start for realme, whether it is excellent 5G performance or the more cost-effective 5G mobile phones currently available, can meet the needs of most consumers. At the same time, the introduction of, realme UI also indicates that the operation of realme in China is becoming more and more perfect, from the product layout of each price segment to the launch of its own realme UI, basically realizes the co-promotion of hardware and software.

Of course, the Realme X50 is only realme’s first 5G phone in 2020, and if nothing happens, there will be a flagship 5G phone with Qualcomm Snapdragon865.

How to play OnePlus 7T pixel macro? Take you to discover the legendary "Lilliputian"

The OnePlus 7T not only has a 90Hz screen, but also has an excellent feel

We will be happy to hear your thoughts

0 Easy get 60 FREE points from Gearbest

For customers
For vendors
Sign Up for Weekly Newsletter

Signup to newsletter to get coupons and discount promotion